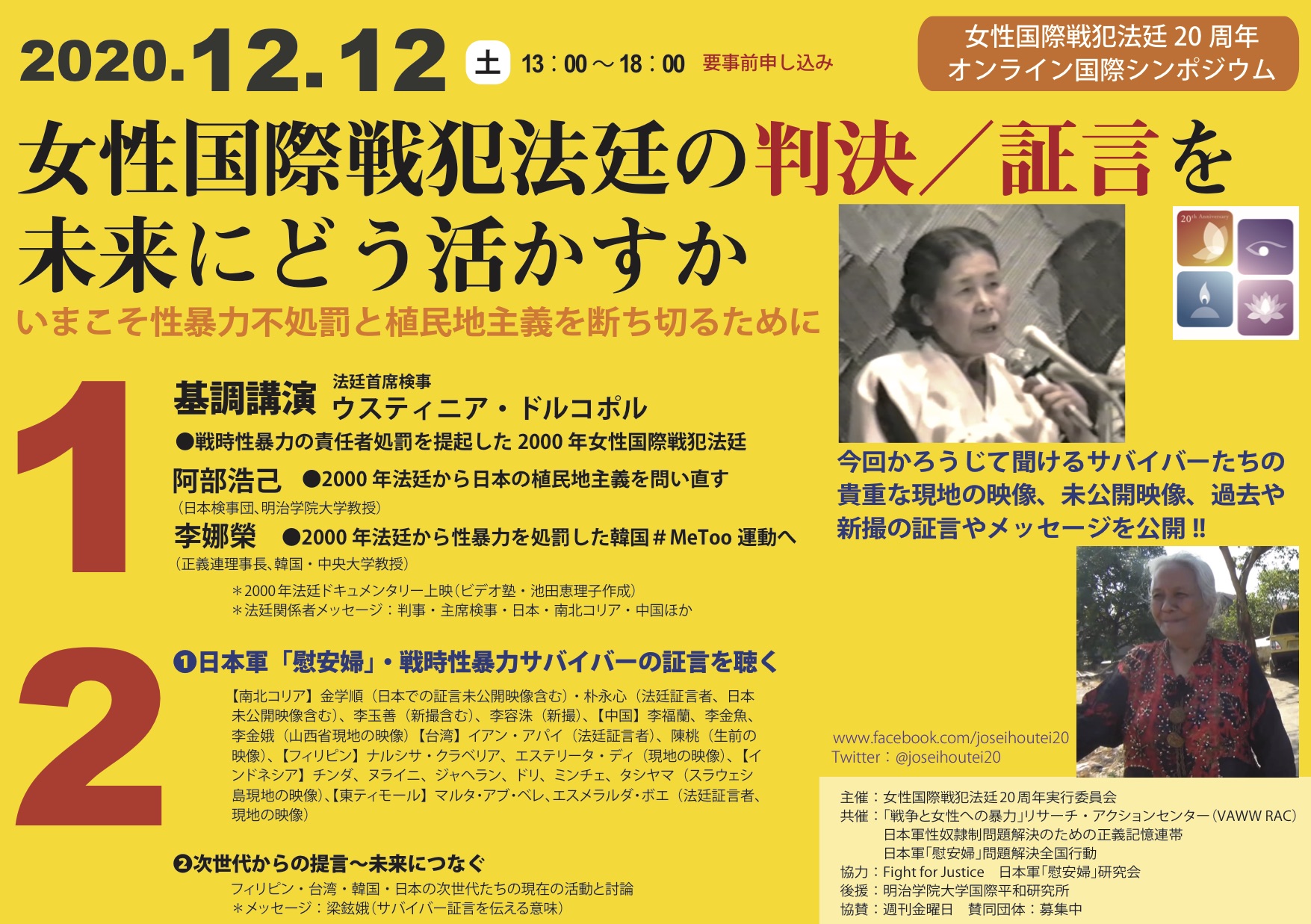 <Part 2>
・Listening to the testimonies of Japanese military “comfort women” and survivors of wartime sexual violence.
Valuable testimonies of survivors past and present from North and South Korea, China, Taiwan, Philippines, Indonesia, and East Timor.
・Proposals from the next generation〜Connecting to the future〜
Current activities and proposals of the next generation in the Philippines, Taiwan, Korea and Japan.

[Caution]
・It is prohibited to film, record, or screen capture this symposium.
・Those who have applied will be able to view the recording for a limited period of time after the symposium.

[Donation] The fee is not included in the donation
・Single unit of group donation is 5000 yen.(You can donate multiple times. The name of the organization will be included in the materials)
・Individual donations are also accepted.

In December , the Women’s International War Crimes Tribunal is celebrating its 20th anniversary. In honor of this, we are having an international symposium with support groups and ”comfort women” /wartime sexual violence survivors from Korea,China,Taiwan , Philippines , Indonesia and East Timor.

Since the association with VAWW-Net Japan (now VAWW RAC) and support groups from the affected countries, the tribunal was convened in Tokyo. The tribunal was hold with the member of 64 victim women , prosecutors/women’s organizations from 8 countries and global citizens.
The purpose of the tribunal was to respond to the victims’ demands for justice and to use evidence from Japanese perpetrators to prevent further unpunished sexual violence ( which still exists now). The tribunal judged the perpetrators of Japanese military sexual slavery under international law based on the evidence. In the final judgement, the court explicitly found that the Japanese military and government had “perpetrated rape and sexual slavery as crimes against humanity ”.

Twenty years later, the issue of “comfort women” remains unsolved, and unpunished sexual violence and hate speech against other ethnic groups are still very serious in Japan. Meanwhile, the #MeToo movement and the Black Lives Matter movement are expanding to protest unpunished sexual violence and slavery/colonialism around the world.
The symposium is a good opportunity to reflect on the tribunal and to pass on the verdict and testimonies to future generations by hearing directly from survivors in various countries. We hope you will join us.
Categorized: Uncategorized